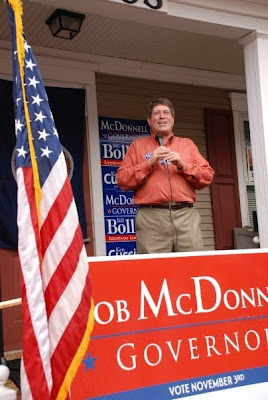 The following is passage is taken from State Senator Steve Martin's (R-Chesterfield) Facebook page where he was recently engaged in debate with fellow Virginians over the potential former Senator and Governor George Allen's nomination to represent the GOP in a bid to unseat Senator James Webb:


Robert and Amy; "For some reason you believe that you have a right to control my evening and the focus of it. You are fully aware that this is my wall and not your own, yet you keep posting things here for me to respond to. I have worked very long days including weekends for several weeks and I am very tired. Today I had hoped to rest but found it necessary to travel out of state for an aunt's funeral. I left very early this morning and got home a few hours ago, and have found it necessary to respond to you two ever since. Apparently, you will only be happy if I stop responding to any and everything you say.Yes; please move along. This is not your wall for you to post whatever you choose. That is what your wall is for. Hijacking of someone's space and time is never welcomed, by anyone.I appreciate both of you, but this is not your wall for your unchallenged use. Do you mind if I take a break from your onslaught" (Steve Martin)

This was but one of the comments posted by Mr. Martin on his page as he responded to individuals who have challenged his apparent endorsement of George Allen in the GOP Primary. It has really been interesting to watch and read these things because apparently Mr. Martin has had a great deal of trouble grasping the Social Media medium when compared to other elected officials. Mr. Martin constantly complains about people "hijacking" his page whereas we rarely (if ever) see other leaders resort to such petty quibbles. Mr. Martin would later post on his page about being compelled to delete and remove comments from those that have differing points of view on the issues than himself. Mr. Martin would later post:

"Some believe a store owner's removal of an unwanted bulletin from his front window is censorship. No. That is controlling your storefront ... your wall. The same is true on FB. Censorship would be deleting someone else's desired messages from their own wall. Deleting unwanted posts from your own wall is called, "taking responsibility." Too bad, so much of it was reguired this evening" (Steve Martin)

It has become clear in the last year, as we have posted about this before regarding Mr. Martin, that he has a tendency to feel very insecure about his Facebook Page. In fact, when he states "unwanted posts" its as if he is implying that they are unsolicited when in fact through Facebook when you accept to be friends with an individual let alone a constituent you are inviting posts upon your wall.

By accepting a Friend Request we basically provide that person with access to our wall and in doing so provide them with license to post whatever they would like. After all, these people are our friends right? Mr. Martin has every right to delete and take control of his wall of course, but is it really professional to whine about having to engage and respond to constituents whom may have a different perspective, especially when you post a virtual endorsement for another political figure. It appears as though by posting such an endorsement, Mr. Martin was inviting constituent response from those whom are his Friends on Facebook, otherwise why even put it out there and through a press release.


What has to be the most humorous response regarding Mr. Martins plea for sympathy came when on of his commenter's stated in reference to how Mr. Martin should look at this issue came when Mr. Martin stated that the wall on Facebook was property in the same manner in which a renter has rights over property that may be owned by someone else and no one has the right to enter said property or post on the wall or trespass. The comment directed at Mr. Martin was:

"The difference Sen. Martin is that by accepting Friendship with someone to use your renters analogy you have basically given them the keys to enter your property"

Obviously, embarrassed Mr. Martin quickly removed the above comment as well as those that were in agreement most likely because it basically undermined the stated position of Mr. Martin. In fact, the Senator even removed his own comment regarding the "renter" analogy. The thread now reads as an uneven, hard to follow thread where none of responses seem to flow as you read them.

Once again, Mr. Martin has proven his inability to understand Social Media at its basic core but after the last year or so are any of us really surprised?

Interesting point as well is Martin's endorsement of George Allen in the statewide race, but Mr. Martin still has failed to endorse Mr. Robinson;the only Republican candidate that has announced a candidacy for Supervisor from the Matoaca District in Chesterfield, which is smack in the middle of Martin's own District. Apparently, Mr. Martin is sticking by incumbent Marlene Durfee -Independent, much to the dismay of conservative voters in Chesterfield.
Posted by FoodforThought at 11:40 PM

How many times does he have to demonstrate that he simply doesn't like the heat and cannot stand up to it. That is why he could never reach a state-wide office in any capacity. His answer certainly is not "censorship" but it basically is like those people at the town hall meetings being told to basically shut up.

Does he really expect people to feel sorry for him because he has to "monitor" his own page. Here is a novel approach; don't have one!

It is my understanding that the parties involved were reached out to and an apologize was given by his office.

Oh please. He is such a jerk! I don't understand why he keeps getting elected.
He gives the word arrogance new meaning.

Any new technology or platform will face challenges, but the benefits far outweigh the costs. Individuals have to be smart about their social branding- whether for corporate or personal use. Be true to who you are, but know that both a positive and negative to social networking is all eyes are always on you!

Any new technology or platform will face challenges, but the benefits far outweigh the costs. Individuals have to be smart about their social branding- whether for corporate or personal use. Be true to who you are, but know that both a positive and negative to social networking is all eyes are always on you!

The information were very helpful for me, I've bookmarked this post, Please share more information about this
Thanks