Frankly if there is one thing that I am glad to see its the ranks of the Tea Party defend itself regarding the blanket slandering of them by the liberal media on both the illegal immigrant issue as well as the accusation that they are somehow racist for not endorsing Obamacare.The liberal elites forget themselves, especially those in the media ranks like Mathews and Olbermann. The conveniently dismiss their beloved Democrats for such a horrid past and record on race. They always present themselves as students of Congressional history when they tout or shill for liberalism and yet never acknowledge the evil hand the Democrats had in slowing the path to Civil Rights. At the same time they paint the GOP and the Tea Party has haters and racists and yet seem very willing to forgive or dismiss the actions of its ranks regarding the issue. Instead the prop up the Sharptons and the Jacksons of the world but not those in the Congress from the Republican side that fought and frankly PASSED the Civil Rights Act of 64. I am so tired of having these hacks rewrite our history let alone shape the current debate of illegals with the same bull****. The Democrat “18″was determined to block Civil Rights in America. People like Strom Thurmond, Robert Bryd, William Fulbright ring a bell- all Democrats in 64. In fact, its was the GOP and Everett Dirkson( why is he not an American household name?) who broke the Senate filibuster in the Senate where 95% of Southern Dems opposed the Act. Lets not forget those Governors either- none Republican in Wallace, Faubus, Maddox that attempted to subvert change. So I am tired of these media elitists portraying an historical context (the GOP) that does not FACTUALLY exist. In fact, Dirkson was presented with an award honoring him by the NAACP lest we forget.The Illegal debate is being used to simply fuel bigotry and yet made those modern day Democrats doing it ought to reconcile their own Party’s history before slandering citizens simply carrying out their Constitutional rights.Maybe we should make sure that our future generations understand just why it was the Republican Party came to be in the 1850’s; the pro-slavery views of the Democratic Party. Guess we don’t teach that today in our schools because it does not quite fit that liberal narrative of Republicans all being bigots and racists.
Posted by FoodforThought at 9:06 PM 5 comments: Links to this post

Carlos A. Martinelly Montano: The Face of Our Immigration Problem 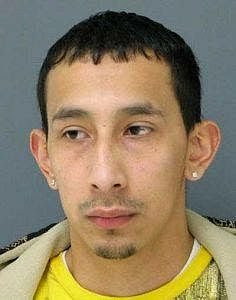 Timing often times is everything. Especially when you are talking about such a hot topic in political circles as illegal immigration. I have long taken issue with the far liberal left and its characterization of those of us who believe we need to fix our immigration problems as simply prejudice against Hispanics or even racist. Its is so easy these days to have the race card thrown about. One only has to look at the current debates in Washington over the ethic violations of some prominent Congressional leaders or tune in to any nightly bantor on MSNBC regarding the Tea Party movement.

Just when it appeared as though the anti-government intrusion crowd and the Tea Party movement may have climaxed with exposure and began to give way to the nightly beatings on mainstream media Carlos A. Martinelly Montano steps in and absolutely illustrates exactly what is not only wrong with our government enforcement protocols but what also is wrong with the far left today.

Tune in to the mainstream media you would likely not find much coverage of substance regarding the Montano issue outside Virginia and frankly that speaks volumes. You see, when an illegal alien gets behind the wheel of a car and commits involuntary manslaughter it may not be that big of a story at least nationally but when this same illegal alien had been turned over to ICE twice by local law enforcement and released and had appeared in the Courts system some four times in the past few years for violating Virginia law and then gets behind the wheel drunk (for the third time) and kills a Catholic nun and critically injures two other nuns its not something the liberal media wants to cover. Why? Well, the incident does not advance their narrative of American life thats why.

People like Chris Mathews, Rachel Maddow, Keith Obermann and other liberal elite would have the masses believe that if you are an individual who wants the government to carry out its function of deporting illegals than you are nothing more than a racist. The current debate over the true purpose of the 14th Amendment this week and the reason for its creation has further been hijacked by these liberal elites to somehow been for those entering America illegally from south of the border. They completely neglect historical truth in the debate or even look at the manuscripts of those who put forth the measure in the first place in which it was concentrated over the plight of the African-American in the South and the fear that individual States would not recognize citizenship for them. So, in effect the Federal government would have to make sure it guaranteed such recognition. Now, of course people like Mathews and his ilk would like see yet another interpretation that fits its narrative for America be used and applied to illegals. Of course, they do not even recognize people like Carlos A. Martinelly Montano as an illegal. In their eyes the immigration laws are not real laws in effect and should be ignored. Comprehensive reform is nothing more than a smoke screen for keeping the status quo.

Thats not to say that just the liberal media is to blame for misinformation. Leaders from both sides of the aisle in Washington are just as guilty for ignoring the efforts of the boots on the ground in our public safety ranks. Our police do their job and arrest those breaking our laws, our courts hear the cases and render judgement, and illegals are turned over to the Feds (ICE) and simply released. Irrespective of whether they pose a public safety hazard to our citizens. Our politicians (some) sit by and fail to act because the immigration debate is too hot an issue, especially in an election year. Last I checked, we always have elections every year even if simply on the local level.

So how does one Carlos A. Martinelly Montano fit in to all of this debate? Well, Montano proves that the arguments being made by the Tea Party are not only sound but factual. Its not only the Border States being impacted by illegals with regard to public safety, but the entire country. Our hospitals are filled with those being provided care on the backs of our tax dollars and along the border those Americans being terrorized by illegal gangs and cartels are seeing their property values plummet as well as citizens being robbed and in fact kidnapped in some instances. In fact, even Northern Virginia has had considerable issues with gangs associated with Central American origins and whether these gangs are filled with legal immigrants or illegals is certainly a fair question to ask.

ICE was provided with Carlos A. Martinelly Montano from local law enforcement two times regarding an inability to verify legal residency ( as accorded by working relationship Virginia has with ICE)

At any one of these instances, Montano should have been targeted for deportation and held until such deportation could be executed and NOT released back into society. The system failed. As it almost always does under its current structure.

Well, those in Prince William County who railed against Republican Corey Stewart (including MCNBC) in 2007 for his illegal immigration proposals are running for the hills. Turns out, the arguments being made by Stewart regarding safety have simply been vindicated by the action of Montano and the inaction by ICE.

Stewart called this incident "appalling". Stewart went on to express the view that "the despicable thing is this criminal was...handed over to ICE twice, and released by ICE twice."

Its time we all recognize that the issue of Illegal Immigration is better defined by Public Safety and Border(National) Security concerns than political gamesmanship.

How many more caring and giving citizens lives like Sister Denise Mosier have to be cut short in defense of illegal immigration?
Posted by FoodforThought at 2:00 PM 4 comments: Links to this post