Baseball in Chesterfield? Why not? 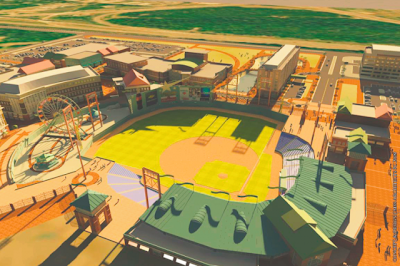 If you live in Chesterfield, the idea behind "regionalism" in the last few years has met with resistance by the masses throughout the greater Richmond area. Its no wonder given the complete inability for the City of Richmond to release itself from the stranglehold of city politics. Whether we are are talking about City schools, budgets, the politics of personal destruction and its latest inability to get a deal for Baseball in the Bottom. Residents of Chesterfield and Henrico County in the last decade have seen the City of Richmond as more of a problematic liability than a partner in the future.

The latest development that casts the City of Richmond in a dark shadow is the development out of Loudoun County regarding the potential for the Kincora development at the intersection of Rt. 7 and Rt. 28. The proposed site is home to some 424 acres of mixed-use development with a proposed 5,500 seat Baseball stadium for an Atlantic Minor League baseball team supported by the likes of Hall of Famer Brooks Robinson.

The model of success for such proposals in terms of Baseball is the Long Island stadium where the Ducks in the Atlantic league play and have contributed to greater economic development for the community.

Given the demographics of Loudoun County, it is no wonder why many residnts of Chesterfield are asking themselves why Chesterfield couold not be a wonderful home for a minor league baseball franchise. After all, the Braves franchise moved from Richmond to Gwinnett County in the suburbs of Atlanta. Chesterfield has about twice as many people as Loudoun County with a very similar demographic, though the adjusted gross income may be slightly higher in Loudoun. Chesterfield, however does have more children involved in community athletics such as youth baseball, soccer, football, swimming, volleyball, tennis etc than Loudoun.

It really makes you wonder why there has been all this concentration with baseball in the City when their appear to be viable alternatives in suburbia in the greater Richmond area.

Would you be willing to support a Chesterfield-based franchise over a City-based one in terms of regular attendance at the ballpark?

One key aspect to the Kincora plans is the stadium has NO public funding. Translation; no tax payer funding.

Given the upcoming sessions of the Steering Committee looking into providing guidance for the new Chesterfield Comprehensive Planning, we must make sure that we leave in our planning the opportunity for the County to be a home to such a project like Kincora should it ever come our way.
Posted by FoodforThought at 5:46 PM 13 comments: Links to this post

The rumors have circulated for weeks within the grocery industry concerning the potential sale of Ukrops Supermarkets to Ruddick Corporations wholly owned subsiderary Harris-Teeter. The there has not been an "official" confirmation of the sale, rumors circulated when Harris-Teeter evidently applied for the required ABC permits for 29 stores in the greater Richmond area.

Those growing up in Richmond have long been familiar with Ukrops and its non-alcohol policy as well as its policy of being closed on Sundays.

Harris -Teeter is based in Mathews , NC with Ruddick Corp., a NYSE company operating as a holding company for HT and A&E, Inc is located in Charlotte, NC.

Richmond has witnesed the successful entry of another North Carolina market in The Fresh Market located out of Greensboro, NC where Harris Teeter also has operations. While Fresh Market is not a true grocery concept, Harris-Teeter in recent years has reformated its stores to be "market-like" than grocery.

Fresh Market has stores in Richmond (West End/Midlothian), Roanoke, Williamsburg, Virginia Beach and a recently opened unit in Newport News. To date there are almost 90 Fresh Markets predominantly located through the Southeast.

"Official" word should break very soon on a deal that rumors have specualted could be in excess of 850 million.

What Does the Recent Proffer Debate Tell Us?

Well, the Chesterfield County Board of Supervisors took another stab at the Cash Proffer debate last week. I have been awaiting many of the members, including I-Daniel Gecker of Midlothian to deliver on some of his campaign rhetoric from 2007 when he launch attack after attack against incumbant R-Don Sowder for being unwilling to make developers carry a bit more of the burden regarding growth, but again Gecker failed to live up to promises he made to voters.

In a 3-2 vote, the Cash Proffer rate was increased but by any standard it was again a victory for the developers who seem to be entrenched with sentiment within our current Board which promised sweeping change during the campaigns of 2007. Unfortunately, only I-Marleen Durfee and D-Holland seem dedicated on delivery what they promised.

Again this time around as in last year it seem to come down to the forces of Durfee and Gecker. Durfee managed to get a compromised rate increase last year in the face of Gecker's continual objections to any increase initially. Durfee sought much higher rates than the approved 18,080 that was passed then and this time around the Board fell short of the estimated 25,511 break even analysis by increasing the rate a mere $886 to $18,966.

Some would say its a small victory, but given the rising costs of infrastructure and the fact that the County already lags considerably behind other juristictions of its size in proffer rates the Board again has failed to begin the process of bringing the tax burden of growth to more of a shared contribution. Gecker in his campaign of 2007 stated publically that he flet that the 80/20 citizen to commercial/developer ratio was unfavorable and used this ratio as a sword against his opponent and yet in two years this citizen fails to see in any instance where Gecker has delivered on policy where that ratio will realistically change.

We have to remember that after years on the Planning Commission, Daniel Gecker has had a sustained relationship with the developer community throughout the planning process for some of the largest scale developments in the County's recent past. It was the hope of voters in the last election cycle that because Gecker understood the developer dynamic that he would better serve citizens at narrowing the gap between offsetting the costs of growth.

Loudoun County whose growth is mirroring Chesterfield in many areas has proffers of 48,000 per lot, Stafford County 43,000 and Prince William County 37,000. Are we really to believe that it costs these areas fifty percent more to deliver on services to its citizens or is it simply a fact that Chesterfield has determined not to have business pay its fair share in large part because of the stranglehold developers have had on the Board in recent years?

We continue to get the same arguements from the developer interests regarding the passage of such fees on to home buyers and how the Proffer System itself is broken and the debate over other methods is still unresolved. Meanwhile, many of these developers, especially the public firms continue to pay those proffers in the other areas of the State without too much debate.

Developers understand to to penetrate and gain access to markets as favorable as Loudoun and NOVA there comes a price. There is tremondous income demographics for them to provide the housing to offset any of the proffer rates being imposed there. Are they saying that Chesterfield cannot support such home prices or housing specs to offset the increase? And is the rhetoric its about affordable housing sincere or merely just another smoke screen?

In my view, access to markets such as Chesterfield or Henrico is in high demand because of the People who live here and the adjusted gross income that remains stable in the area to support new housing. Developers have yet to make the case, other than in rhetoric (fear rhetoric) that rising proffers would make economic development suffer. Besides it is my understanding that commercial development is not paying proffers and the system is set up for residential development. If the Board is really concerned with balancing the cost of true growth in the County, should not commercial interest pay their share as well as the residential developers?

The proffer increase is "really meaningless in the grand scheme of things".

Really? I think the case very well may be made in 2011 that that assessment can applied to Geckers leadership as well.
Posted by FoodforThought at 4:55 PM 15 comments: Links to this post